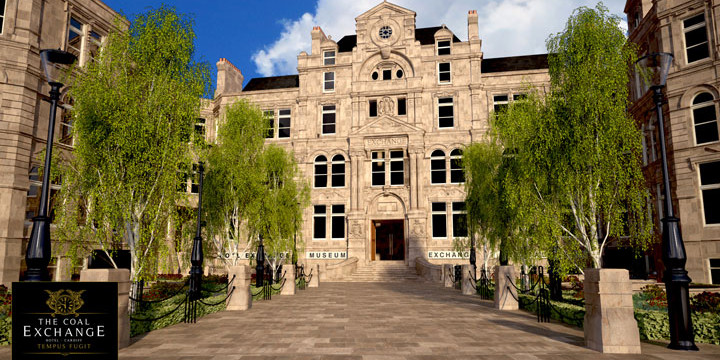 The Coal Exchange, which stands proudly amongst its peers, has long been left to fall into disrepair. The building is battered and worn after years of decay.

When people talk about this building, they will often talk of its past grandeur and place in history as the centre of the world’s controversial coal industry. The building ensured the flow of funds were channelled through her hallways, providing thousands of families with the means to feed and clothe their children. In many cases, what was seen as the centre of their community would also be the very reason to shorten their fragile lives.

Whatever your thoughts are on this magnificent building, good or bad, you cannot deny it plays an integral part of the ancestry of Cardiff and wider-Wales.

Many of the UK’s listed buildings no longer serve their original purpose, and developers do not wish to go into the detail that is required to save them. What they would prefer to do is sit in their ivory towers, looking no further than the plans strewn across their desks, with their fleet of advisors who serve to sterilise their new structure.

This is not our intention. Signature Living and I intend to keep this building as close to the structure as possible. We certainly will not be changing any of the exterior walls, apart from re-engaging them with the building.

It is widely known the rear of the building has had to bear the ingress of large amounts of water over many years, which has caused her wooden joints to not only rot, but to disengage from the main structure. This, along with the roof, will be the first of the tasks we set out to complete, as timing here is of the essence.

With a listed building, such as The Coal Exchange, it is essential to preserve the structure as was intended when first erected, whilst ensuring it is self-sustaining – with the latter, arguably, being a primary aim for the building.

Save the Coal Exchange

Save the Coal Exchange has made it very clear that they do not wish to turn this building into a hotel, even though they are now looking for a local youth hostel to take up some space. I would argue that there is no better option that a hotel.

A hotel would transform this entire building into a public space. If it were turned into an office, walking through its historical corridors would be kept to the chosen few. Mike Johnson, who actually owns the lease to the main music hall, believes what we intend to do with The Coal Exchange actually dovetails with his own view of the building.

As a hotel, we will not only generate a turnover in excess of £10 million per annum, but we will also gift the same for the local community through its bars, restaurants and stores. We all know this form of inward investment is desperately needed. This investment will also help to raise the immediate commercial property values that dereliction helps to suppress. We will also ensure the creation of over 100 building jobs for one year, employing locally. We will also create 60 full time posts, without one single zero hours contract, as I believe we are the only hotel that does not support this practice.

It is also our intention to inset in other buildings in the immediate area to help bolster the public domain, which has also been allowed to fall behind the standards set within Cardiff’s city centre.

The Coal Exchange itself has had the benefit of the very well-meaning Save the Coal Exchange team, who have ensured the building has been secure and, wherever possible, water tight.

Unfortunately, the funds and the knowledge need to ensure the safe passage of this building has not been supplied, and that is the juncture we find ourselves at today.

This is a critical moment for The Coal Exchange, and we plan to ensure its safe passage for the next 100 years.

The Coal Exchange only has to gain planning permission, allowing us to ensure the elements, which are getting a tighter grip on this building year-on-year, will be laid to rest. Plans to gain Lottery funds or a rich benefactor, who will probably do what we intend to do, are very slim at best. 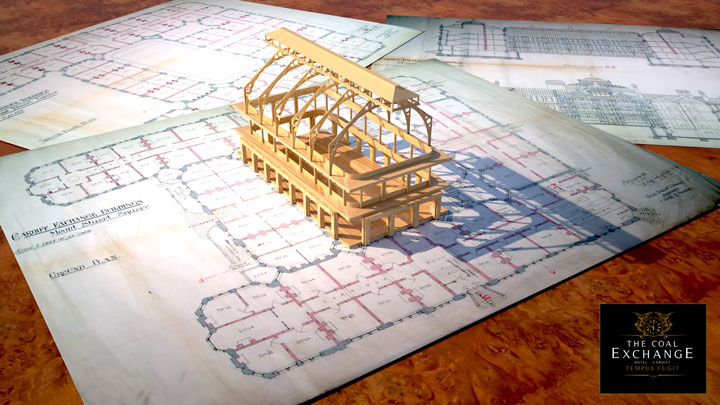 The building has been closed for several years and even then it was only the main hall that was open to the public, which accounts for 1/20 of the building.

This building has, without a doubt, a race against time to be saved and, sadly, the resistance from the Save the Coal Exchange campaign has been nothing but disappointing. I have met with their representative on many occasions; I have even invited him to one of our hotels, which, by his own admission, he enjoyed. I personally ran him through chapter and verse of how we fund and operate our business and he stated he was very impressed.

Save the Coal Exchange argue that rental income from the handful of groups operating within the building right now will pay for refurbishment, yet they pay the lowest rental in the centre of Cardiff. Even if they were invoiced a reasonable fee for the rental of this space, it simply would still not pay for the plaster to be placed over this building’s gaping wound. A fact Save the Coal Exchange know too well. Do they want to hinder any progress with this building that is not controlled by them? I fear they do.

There has never been any secret of how we will fund our refurbishment or building process. There are no banks involved, as they do not want to be involved in a building when it is unclear how deep the well is. Indeed, the involvement of a bank would delay progress. The Coal Exchange has been funded, in part, through our BPRA team and the main trench through our international investors. For the avoidance of doubt, a BPRA scheme is a HMRC backed scheme. The scheme was precisely established for projects such as The Coal Exchange.

At our last meeting, I proposed and it was agreed in front of the Save the Coal Exchange representative and Mike Johnson, who owns the rights to the hall, that a sub-board would be created to ensure the integrity of the building would be maintained with regard to its listed building status.

The Fuel of Adversity

Myself and my team at Signature Living have been creating plans to restore this building for over nine months. We have been criticised on a couple of occasions by Save the Coal Exchange for not creating plans. Let me be clear, the reason for this is due to the fact that Save the Coal Exchange would not provide us with any access to create a survey of the building, unless we gave them £70 per hour, which would have given them a payment of £2,500.00. Not at all charitable and not a gesture of an organisation who state they are willing to listen to any plan to save this building.

On a broader note, I have been subject to a large amount of criticism over the last couple of weeks, which has been driven by Cardiff South and Penarth MP, Stephen Doughty.

I have never shied away from my past. I have wrote several blogs and did an interview with the Liverpool Echo on coming to terms with losing everything, before building my business back up again. I do believe it has sculptured me into the man I am today.

There is no better fuel than adversity. It provided the strength to push through the worst recession the world has even known, whilst creating a business that is pushing the parameters of the UK’s accommodation industry.

Being penniless in my mid-forties is not a process I ever want to re-engage with again. In some ways, I do believe Mr Doughty believes he is riding the white horse into the battlefield, but there is no battlefield here. We are just a company that has the relevant tools to bring back into a life a building that has so many stories to tell. I do believe the amazing online digital and PR team we have at Signature Living are the very team to ensure people from all over the world will want to come and see this stunning structure again. We want to bring the stories of The Coal Exchange back to life and celebrate this iconic building once more.

We are the only company in the UK that not only develops but operates its buildings as a hotel, strapping a social beacon to its roof and re-introducing the stories that resonate with this building. This ultimately provides the hotel with a DNA, which cannot be shared by any other hotel in the world. In part, the hotel will ensure that people, who may have never known of the plight of this building, will soon crave to come and stay within its walls.

The real issue here is the message Mr Doughty is sending to the rest of the UK business community, especially potential developers. After the crash, I would say that 90% of all developers have some kind of adverse issue blighting their past, such as liquidations, administrations and, dare I say it, bankruptcy.

The only difference between a bankruptcy and a company going out of business is the fact that I, as a director, had guaranteed the funds on a personal level. There are many companies that have closed down with very large sums outstanding to their banks, such as myself; the only difference is I had personally guaranteed my debt, where as they did not.

I was made bankrupt by Grant Thornton. Due to my success as a developer and hotelier, I am now in the position to repay my debt to my creditors and have opened up negotiations to repay the outstanding amount. 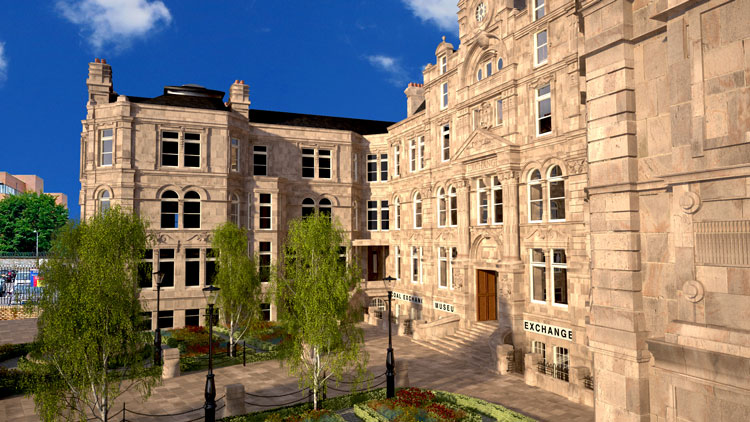 What the people of Cardiff need to understand is that all cities are in a fight to win inward investment. By winning these battles, they will gain jobs, infrastructure and rates, which help the city to run.

My Doughty, in my view, should stand alongside his council to help bring in welcomed investment. His current stance will, however, most likely scare all entrepreneurial developers away from Cardiff. I do not know any developer that wishes to have his or her past besmirched through the newspapers, in the very way Mr Doughty has done to me.

Cardiff has to be seen as open for business for any developer who has deep enough pockets to make a difference, as long as they can prove they have the knowledge and infrastructure, such as we do.

I have visited Cardiff on more occasions than I can count and, I have to say, apart from those small business operating with The Coal Exchange, the public feedback for our plans have been overwhelmingly positive.

People in the local community and wider Cardiff want this building brought back into use to help change the plight of the immediate area, whilst helping to restore Tiger Bay into an area of successful entrepreneurialism and become a beacon of prosperity once again.

We’re determined to make The Coal Exchange the jewel in Cardiff’s crown once again, and I offer an olive branch to Stephen Doughty MP to work with us, not against us.