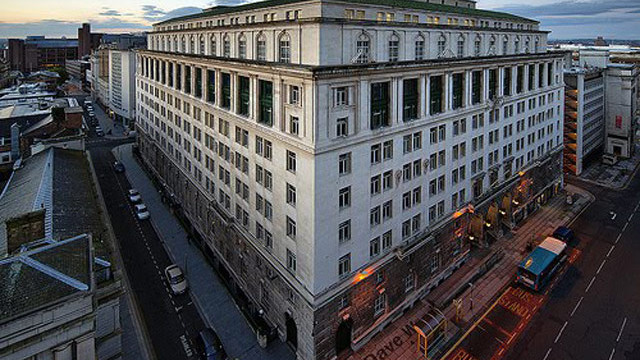 In early November 2015, I enquired about purchasing one of Liverpool’s most iconic buildings, the India Buildings. Some would say it is the later edition to the Three Graces, and it is certainly worthy of its local status as the fourth Grace.

I was informed by a new agency, Worthington Owen, who were joint agents with CBRE, that India Buildings was to be marketed at £20 million. This is a building that has had a very colourful past, as it has been rife with underhand dealings since Mr Achilleas Kallakis and Alexander Williams, both 44 and from London, attempted to defraud Allied Irish Banks (AIB) out of £740m and Bank of Scotland, as it was known. The two property developers purchased the building for £45 million.

Although I do not know the full detail of what transpired once the building was placed into receivership; I do know the Green Property Co. purchased India Buildings, along with a cluster of failed property developments from the bank. It was at this point, during the stewardship of this company, that India Buildings suffered its greatest demise, falling from an occupancy level of around 80% to less than 20%.

In my view, the reason for this poor level of lease units within the building is due to the fact many property funds are only interested in London. When existing tenants requested for this particular company to create a new deal, as their old lease was coming to an end, they simply declined, which will always lead to a very sharp decline in the rental yields.

In November 2015, I gave agents Worthington and Owen an unconditional written offer of £20 million, which was exactly what they wished to gain. Worthington Owen came back to me within a couple of days, with a request that I gave them proof of funding, which I did. Our deal was to give them a deposit of £2 million, which should be more than enough to show them my intent to purchase. After all, who would ever want to lose £2 million by not completing a transaction? Aligned with the deposit, we also asked for a three month completion date, and yet this was still not enough.

I was then requested to provide further confirmation that I could gain the funds required to purchase India Buildings, so I reached out to two of Liverpool’s most prominent businessmen, with one who can only be described as the UK’s most prolific businessman, after developing one of the nation’s largest companies. The businessmen kindly sent the owners of India Buildings proof they could buy the buildings many times over; they even furnished the owners with a letter of intent, which stated they intended to purchase India Buildings with Signature Living as their chosen partner.

I believed I was now in a position to answer all their doubts and asked, yet again, if my offer was accepted. Not only was I in a position to purchase an iconic building, I was set to go into partnership with two outstanding businessmen. We were now coming up to the Christmas period, and I was told the fund were waiting on another bid.

When I was told the new bid had hit the desks of Green Property Funds, I was certain we had secured the building, as their offer was for just £17 million.

Can you imagine my utter disgust when I was told our offer had not been accepted? Green Property apparently did not care about the extra £3 million they would have secured with my offer. Their answer, which came via Worthington Owen, was they were making that much money in other areas of their business, and so the board had sanctioned a lower price for a new fund to purchase India Buildings.

From the first conversation I had with the agents, who were selling this property and who I had a very good relationship with, as I have secured multiple projects through one of their partners, Mr Andrew Owen, who from the outset has always stated he has no part or say in the outcome of this possible transaction. I believe both Worthington Owen and joint agents CBRE knew from day one the building was to be sold to the incoming fund for £17 million – which I have no problem with. I would have accepted the fact if they would have told me from the outset, but they never did. Instead, they allowed me to spend many hours and a lot of money on architect plans. I even created what would have been a great synergy between two great businessmen and my company, who have a reputation which spans the World and would have been seen by all a major coup for our city, this would have created a large amount of jobs and sharpen our city’s office and accommodation offer. Our plan was to create Liverpool’s first 5 star hotel and Michelin Star restaurant, which would act as the last piece of Liverpool’s stunning rise through the accommodation rank and file within the UK.

I am a Liverpool developer who will always live in this beautiful city. There is so much work we have to do, as a company, to help our city and our Council achieve their aspirations with regard to job creation, development and, above all, telling the world how amazing our people and city are.

What concerns me greatly is this iconic Liverpool building will once again be owned by someone who sees it as just another profit line. If Signature Living has proved anything in its seven year history, it’s that we not only give all our buildings a new lease of life, we also give them a huge online presence, which fans of the city, from all over the world can rejoice in the resurgence of this great building. Yet here we are allowing an outside London fund to come in and take on a building, which will just be another building to them, and purchase it in the manner they have, by underbidding another Co by £3 million and still securing it. In my view, this does not allow the building the chance to wrestle itself from the smell of deception, which has haunted it since the fraudulent past of two now jailed developers.