Home  /  Homepage  /  Navigating a business through Brexit, COVID and a hostile media 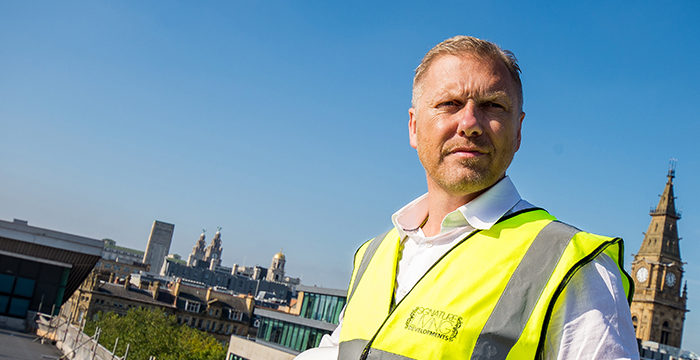 Many a successful businessperson has a story they draw on explaining their journey which can be summed up in this way: “don’t be taken in by my success, I’ve had to fail a lot to arrive here!”

It’s hard to find an entrepreneur who doesn’t have one of these stories.

How they failed, maybe failed again, before freeing themselves from the anchor weighing them down to fight back using that experience of failure as the key ingredient in their eventual success.

In America they wear it like a badge, and they tend to forgive previous stumbles if you respond and rebound.

It’s the kind of impressive story that will garner a million views on YouTube.

After all, who wouldn’t be inspired by that kind of tale.

And this path of failure is littered with calculated risks that looked promising but were dead ends.

But it’s also the path of experience, and experience comes from bad judgement.

This is all part of an entrepreneur’s turbulent life.

Each failure becomes an opportunity to learn and move closer to success, to that good judgement.

The 2008 financial crash almost ended my development business before it even started.

And often times, situations are thrust upon us as business owners that we can’t control, but that threaten all the work we’ve done.

In my view Brexit was a path that was forced upon many a business owner, who felt that any instability it caused would dismantle their hard work and an ongoing need for funds.

We were drowned out by a political elite pushing their view of the world, who ignored or at best paid little heed to the ramifications outside of their Parliamentary bubble.

This was accompanied by a broadcast media which seemed to have an insatiable desire to dismantle sensible arguments in pursuit of clickbait headlines that did little to inform.

Then, just when we felt the country was hitting breaking point, Parliament embarked on their ‘coup d’état’ against the Government, ultimately exacerbating the uncertainty and breaking the back of businesses that relied on the steady flow of finance and investment to ensure we continue to deliver jobs and GVA for our country.

Businesses were left to navigate choppy waters and without certainty, funders and investors left our shores, choosing instead to wait for the outcome of a General Election.

Sadly, for me and Signature Living, the UK seemed to have dismantled our status as a nation of stability.

By the time the election result was declared in the early hours of 13 December 2019, UK businesses had struggled in investment circles for more than four months.

And given the time of year, we knew it would be another few months before investors would even consider coming back.

For me this was catastrophic.

Not only did we have two hotels up for sale for a figure of £50m, with a combined debt of just £25m, we had made a commitment to our investors to payback our loans.

In total our investors were to gain a return of £40m, but sadly the UK was now a no-go for would be funders.

The uncertainty meant we were struggling to fulfil our promise of selling two of our hotels putting the business under extreme pressure, with our ‘Mom and Pop’ investors and some decided to pursue us through the courts.

This was unnecessary, in my view, because it was clear every penny that they had invested had gone straight into the bricks and mortar of our buildings.

I myself had no assets apart from the business that I owned.

I have only one bank account, which has very little funds in it – in other words I am fully invested in my business.

Battling a hostile media in the city

It was clear that our local newspaper, the Liverpool Echo, wanted not only to shed blood but also wanted to perform a public culling and in my view at the behest of our former City mayor, Joe Anderson.

This created a huge problem for myself and my business. We were closed because of the pandemic that arrived in March 2020, and had no way from that time of paying back our investors, and to make matters more difficult we had our local paper stirring up a storm of negativity, which brought yet more issues with my once happy investors.

This gave our mainstream funders no option but to fortify our business against any investor trying to push themselves to the front of the queue and so we entered our business into administration.

In total, the Echo printed 85 negative stories on my business during this period. Very often being the same story receiving different treatments in the name of clickbait.

Murder trials in the city have received less coverage than this.

But they seemed determined to regurgitate the same story with a different clickbait headline, designed for maximum negative effect keeping my business on the rack and with it putting 1,000 jobs at risk.

We were in lockdown, without any funds, and yet the stories came crashing in.

Closing down our efforts to help the homeless

To my mind it was a death by a thousand cuts against Signature Living and seemed to have started when we opened a homeless shelter and I feel that the Echo and our Council colluded to close us down.

Our Council had taken pictures of drug abuse in an open-air carpark at one of my buildings, Kingsway House and had sent the pictures to the Echo.

Their negative campaign then started in earnest with the appearance of an article on their front page which linked my name with drugs in a way that was detrimental to my character and my lifestyle.

I am someone who doesn’t even drink never mind have anything to do with something so nefarious. Yet, here was my name emblazoned across the front page of what is deemed as the beacon of truth in the city that I love.

And it didn’t stop there.

I had to endure three stories in a fortnight all with the same content just rehashed causing maximum pain.

I was entering a battle with two foes on two fronts without any weaponry, just the support of the people, up against a Council armed to the teeth with health and safety, licensing, building control powers etc.

I felt when council officers visited they had clearly been asked to bring us down.

They would nearly always say they were sorry, and it was nothing to do with them, but they would be forced to give us notice for whatever they came for.

By now we had become bereft of funding and with it very short of the cash we needed to support a business of our size.

Before the first lockdown we had 15 building sites and five operational hotels with 1,000 staff.

Those hotels helped to fund the developments that we had, but once they were closed, so was the chance of finishing our building projects.

Add in a global pandemic

Brexit was one thing, enduring this pandemic has been another.

This pandemic meant that all hotels would close for long periods of time in what has become a catastrophe for the sector.

Who would invest in a hotel at this time when no one could say when it might reopen? It just compounded all the issues.

There is now, it appears, some light at the end of this long dark tunnel.

The COVID-19 vaccine rollout has provided some hope to all and those most beleaguered of sectors including hospitality.

There is no doubt though that the rest of this year and maybe next will still remain a challenge as we try to navigate uncertainty around foreign travel, an Indian variant and the willingness of people to have UK based holidays and ‘staycations’.

We haven’t been sitting still, we have been trying to make our own luck, to bounce back even before the predicted post-COVID bounce back. Signature Living has reached an agreement with our unsecured investors to move forward in the face of all the recent negativity surrounding the business.

We’ve got ourselves back on a firm footing and I am optimistic again about the future.

As for me and all of us at Signature Living, we’re looking more positively to a better future for the hospitality industry as we can continue to break ground on new projects and be innovative with our approach to leisure and hospitality in the city of Liverpool and beyond.