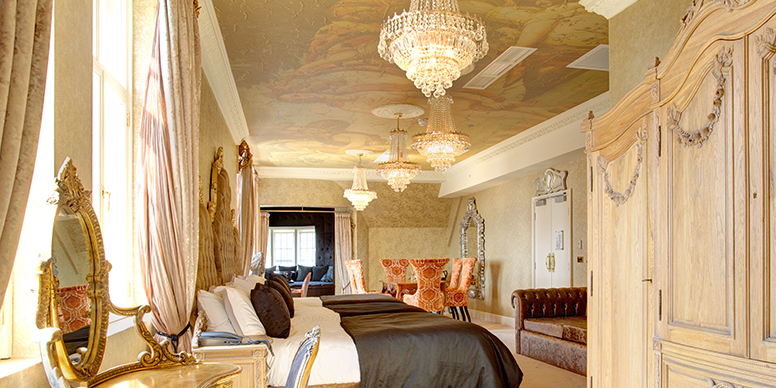 30 James Street has, and forever will be, synonymous with RMS Titanic, the world famous vessel that sank on her maiden voyage after hitting an iceberg on 15th April, 1912. Over 1,500 people tragically lost their lives that fateful night, and the gravity of the maritime tragedy affected people across the UK, especially in maritime cities such as Southampton and Liverpool.

The beautiful building is connected to the vessel as it served as the White Star Line’s headquarters, and was RMS Titanic’s port of registry – which is the reason why she bear the name ‘Liverpool’ on her bow – and why RMS Titanic and Liverpool are synonymous with one another. Liverpool also has extensive connections to many other Cunard and White Star Line ships, such as RMS Olympic, RMS Lusitania, Queen Mary and many more.

Myself and Katie are passionate about restoring historic buildings to their former glory, and creating 30 James Street – Home of the Titanic was most definitely a dream come true. Our goal was to restore the building back to Richard Norman Shaw’s original architecture, celebrating the open-planned grand hall and grand staircase, which the architect was so highly renowned for creating.

We felt it was apt to create a hotel that not only celebrated the fantastic achievements of the White Star Line – which played a big part in shaping the city’s diverse population and history, but commemorating RMS Titanic and her passengers. Liverpool’s extensive maritime heritage is one I am proud of, and most Liverpudlians will most likely have a connection to one of the shipping companies that defined the city in the 1800s and 1900s.

We were delighted to have restored and renovated 30 James Street into a Titanic hotel after just 6 months of completion – which could not have been achieved without the talented, experienced team that helped make our dream a reality. We launched in April 2014 to unprecedented attention, not just from Liverpool but across the world. People from all corners of the globe have stayed in our Titanic-inspired rooms.

Our cabins, suites, doubles and quarters each offer an individual connection to the White Star Line and RMS Titanic, ensuring each stay is different from the other for our guests. We also launched our rooftop Carpathia Champagne Bar & Restaurant that offers breathtaking views of the Liverpool Maritime Mercantile City, which includes views of the Pier Head and Three Graces. Guests can also pay a visit to Morgan’s Spa, which opened its doors in September 2014, and offers relaxing treatments and a luxury spa pool.

Words cannot express our delight at the success of 30 James Street – Home of the Titanic, and we have been overwhelmed by the interest and support the public has shown towards our Titanic hotel.