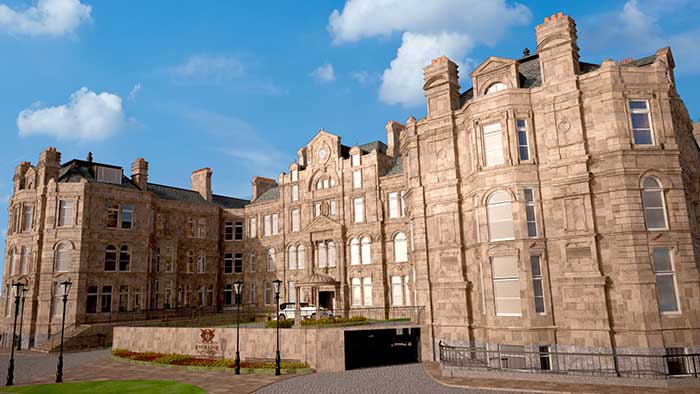 The Exchange Hotel is one of Cardiff’s most significant buildings which has been painfully neglected for a number of years.

Cardiff was the centre of coal trade and quickly established itself as the biggest coal port in the world. Built between 1883 and 1886 by Edwin Seward, The Coal Exchange was the home of coal trading for many years.

The Coal Exchange, and specifically the Trading Hall, had a phenomenal part to play in Cardiff’s standing as a hub for trading. Every day coal owners, ship owners and their agents would meet in the trading hall to make agreements.

After World War I ended, the price of coal plummeted, this meant The Coal Exchange would subsequently suffer. As a result, in 1958, The Coal Exchange closed its doors and coal exports came to a halt. This was utterly devastating for not only the coal industry but for local traders and the wider Welsh community.

Various plans were submitted for the historic Grade II* listed building but none were accepted until the building was acquired and refurbished in 2001. The building became a live music venue yet the refurbishment was limited. Due to this, the historic building was closed indefinitely on 7th August 2013, following building safety concerns.

The spectacular building was left in a severe state of disrepair with many rooms and original features suffering from extensive damage. We purchased this beautiful building in 2016 and have begun the restoration to save the Coal Exchange and transform it into a magnificent hotel and events venue.

Plans for The Exchange Hotel include 200 luxury suites, stunning restaurant and bar, wedding and events venue with the Grand Bassey Hall and indulgent spa. We are carefully restoring every inch of this iconic building in the hope of preserving it for many, many years.

We have previously restored the iconic White Star Line headquarters in Liverpool and transformed it into a luxury hotel, wedding venue and spa. 30 James Street is now, once again, an iconic building in Liverpool which is celebrated and loved by the city, its people and visitors.

The first phase of The Exchange Hotel is due for completion in April 2017, with subsequent phases following throughout the year.

This is a hugely exciting development for not only myself but for the city of Cardiff. We are really looking forward to welcoming guests from all over the world and unveiling this remarkable hotel which celebrates Cardiff and the building’s history.