Following the success of The Exchange Hotel in Cardiff, at Signature Living we’re hoping to branch out further across Wales.

Fuelled by a passion for historic buildings and Welsh heritage, we’ve set our sights on transforming Grade II listed North Wales Hospital into a luxury hotel.

Locally known as Denbigh Asylum, the former hospital closed its doors back in 1995. Sadly, the exquisite building has since fallen into a state of disrepair.

Work began on the North Wales Hospital in 1844 and was completed in 1848. Designed by architect Thomas Fulljames, the building was designed in Tudorbethan style.

Originally following a skilful U-shaped complex to separate male and female patients, the asylum was purpose-built, housing approximately 1537 patients by the early 1900s. 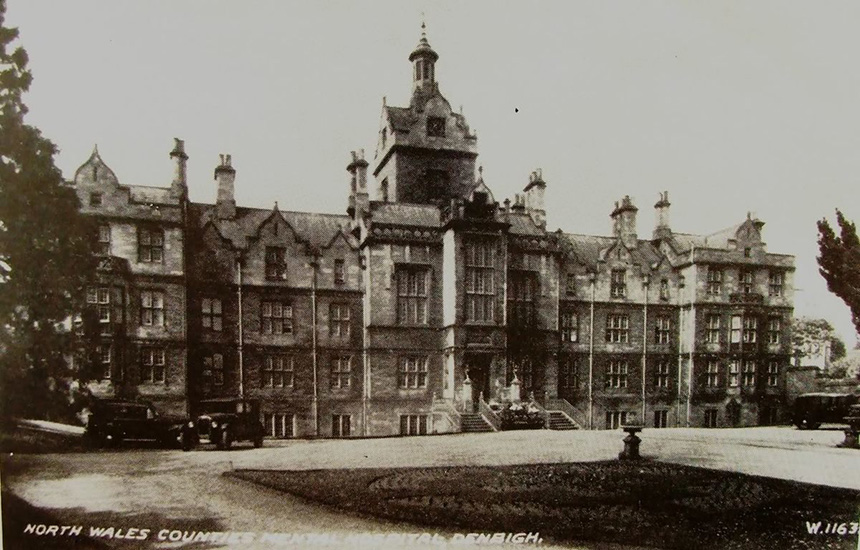 Renowned as a pioneer of early Victorian asylums, the design certainly influenced the build of hospitals of a similar nature.

The design was extended by architects Lloyd Williams and Underwood in 1867. Their influence saw the open rear of the U-planned section effectively closed.

It also saw the addition of two twin-bayed ‘villa’ wards at the sides.  Notably, between 1903 and 1908 much of their work was either demolished or incorporated into new building work.

Denbigh Asylum is Full of Potential

Abandoned for two decades and ravaged by fires, we see plenty of potential in this spectacular site. Despite the damage, the intricate design remains just as breathtaking.

When we first expressed interest in Cardiff’s Grade II* listed Coal Exchange, we made it clear that we didn’t want to knock down the back of the building.

Sticking to our word, our team only demolished five feet of wall out of the 180,000 square foot space. Today, the beauty of the Coal Exchange is enjoyed once again by the public.

Similarly with our plans for Denbigh, we would love to preserve the original features of the Victorian asylum and see the venue restored to its former glory.

Dedicated to the history of listed buildings, we would like to see the building’s past reflected within the hotel. I feel hotels offer an immersive experience, often giving visitors even more of a feel for the past than a museum could.

Cementing Our Plans for Denbigh

As I’ve told the press, at Signature Living our wealth of experience means we’ve learnt how to keep the structures alive without having to change the infrastructures.

Instead of following a set format for our hotel, we like to work with what we have and keep the DNA of the building in tact. We design our rooms around the original structure.

Planning permission was granted for the Princes Regeneration Trust in 2016 to transform the derelict building into 34 apartments, 200 homes and 1,114 square metres of business units in the grounds as part of an £11m scheme.

Our scheme has joined the Princes Regeneration Trust on the shortlist. It is currently being considered by council chiefs.

Due to the current state of the building, we know plenty of time and money will have to be spent before we can decide if the project is truly viable.

The survey required is expected to cost between £50,000 and £100,000 to gather a deeper understanding of the project.

If our plans are approved, we expect to create around 400 jobs in Denbigh with 250 during the build process. We would also include a training centre of excellence for around 100 hospitality staff.

However, before decisions can be made, we are seeking public feedback on our plans. I will be presenting and talking about our plans for Denbigh with at least two open days to discuss ideas.

With such a fascinating past and fantastic location, this is one of the most exciting potential projects for Signature Living.

Offering local communities something special always remains at the heart of our plans and we look forward to hearing your thoughts.

In the meantime, if you’d like to find out about investing with Signature Living, you can browse through previous, current and upcoming developments here.