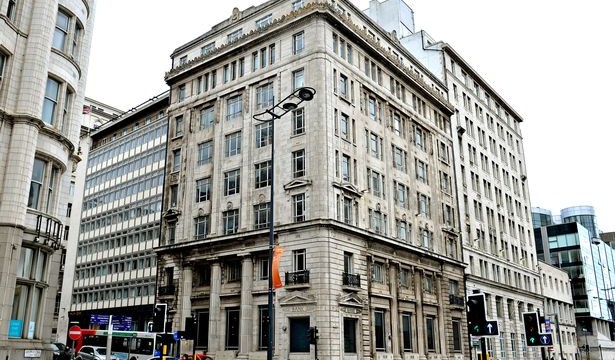 We are very pleased to announce that Signature Living have bought Africa House, a grand 20th-century building located on Water street.

Acquiring this beautiful building is the next step in our expansion plans which will see us obtain a number of unused and listed buildings in the city and develop them into grand spaces which can be used and appreciated by the public.

The building currently lies empty apart from Oh Me Oh My, a teahouse situated on the ground floor as well as being home to a rooftop bar.

The eight-story building will be transformed into seven floors of luxury one and two bedroom apartments with the same plush luxury feel as out other serviced apartments around the city.

The building offers stunning views of the majestic Three Graces and we hope to bring this building to life once again.

The building is a huge 6,500 square foot and was previously home to the Bank of British West Africa and was a prominent place of business in its heyday.

This is the second residential development we have announced in the past couple of weeks, last week we revealed the CGI plans for 60 Old Hall Street which will be our first multi-purpose development. 60 Old Hall Street will comprise of office space, apartments, a retail unit and a rooftop gym and garden which will also feature an outdoor running track boasting incredible views of the city and the River Mersey.

We are delighted to have acquired West Africa House, this unique building offers stunning views of Liverpool’s historic waterfront.

I am really excited about the plans we have for this well-known building and it further demonstrates the company’s growing strength in the residential marketplace.

2016 is going to be an ambitious year for Signature Living with many more exciting announcements to be unveiled in the coming months.